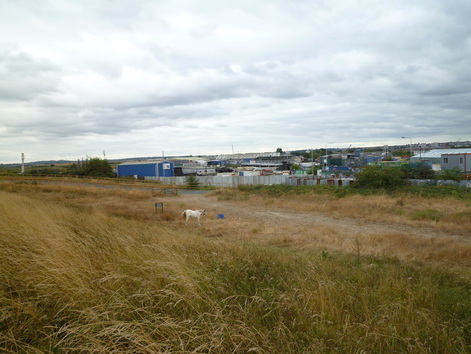 Ready for a new long distance path and I chose the London Loop in the hope that, like the Capital Ring, it will be easy to reach the start and end points by public transport, even on a Sunday, and that it will be suitable for walking in the winter, i.e. not waterlogged or very muddy. As this walk is a circle I could, of course, have started at any point along the route but as the days are still quite long it seemed a good idea to start at Erith, the official start, which is probably furthest to travel for me. That way I will not have to travel quite so far when the shorter winter days have arrived. I knew that it would take a while to get there but having researched getting to Erith a while ago I wasn’t aware of the engineering work that took place on various tracks this particular Sunday. I decided that rather than travel by underground, bus and train to Erith I’d instead start walking from the riverside at Woolwich Royal Arsenal along the Thames Path Extension which conveniently leads to Erith.
It was nearly four o’clock when I arrived at the start of the Loop in the Erith riverside gardens. I’d already walked three hours and was now ready for a break. I had visions of a seaside-like promenade with a pleasure pier and shops selling ice-cream and candyfloss. Alas, there was no candyfloss, not even a café, the gardens looked tired and the pier was simply a long metal structure for walking on to get some good views of the now very broad Thames and surroundings. Seagulls provided some entertainment but I was a bit disappointed by the lack of facilities. I carried on through the town to reach a Morrison’s supermarket. It was now 4 o’clock and closing time so I walked through the car park to a shopping centre where I was pleased to find a coffee shop. Unfortunately, they were closing as well. I saw a petrol station but decided a visit to the automatic toilet down the road was more of a priority. Rather than waste time going back to the petrol station I returned to the path as I still had six miles to go to Crayford Station, the end of today’s walk. Before continuing I finished the last of my water and ate some dried fruit and, feeling refreshed, I walked quickly to get out of Erith. After the supermarket the path left the river and followed roads out of Erith past scrapyards and industrial units. I was not sad to be leaving this rather shabby and disappointing town behind. Perhaps I missed the best bits. I hope so, for the good people of Erith's sake.
The path now led through Crayford Marshes on a raised causeway. This track is shared with the National Cycle Route 1 (Dover to Scotland) and I did see a couple of cyclists. The walking was quite enjoyable here. Ponies were grazing in the drained marshes on one side and on the other side was the river view with Erith Yacht club, the occasional boat and one large cargo ship, as well as salt marshes and seagulls. In the distance the long QE2 Bridge carried the M25 motorway traffic across the river I was just able to make out the cars crawling across the bridge. Soon I reached Crawford Ness where the Thames Path Extension walk ends alongside further scrap yards.
Continuing along the River Darent, passing the Darent flood barrier, I seemed to be the only person out walking and as I followed the river on the raised path through the marshes my thoughts turned to Dickens, thieves, and fugitives hiding in the reeds. It was a cloudy day which added to the gloom but I rather enjoyed the spooky atmosphere of this late afternoon in no-man’s-land.
Soon the River Cray joined the Darent and the Loop walk followed the Cray into Crayford. Here I had an unexpected bonus of free refreshment as the bramble hedge along the path provided a bounty of blackberries – one of the pleasures of a late summer walk. A handful of these were just what I needed. Feeling energised I soon reached Crayford.
I found the station and walked through the open gate to the platform. It seemed very quiet but I was pleased to note from the timetable that a train to Charing Cross should arrive soon. I sat down and ate what was left of my lunch. Then a woman arrived to tell me no trains were running today. Drat! I had to get on a dreaded rail replacement bus! But on the bright side at least this kind lady alerted me to the situation otherwise who knows how long I would have waited on the platform for a phantom train. The bus followed a zig-zag route through southeast London to Lewisham (took nearly an hour!) where I finally got on a train to Cannon Street from where I had a Circle Line connection to Paddington.

PS:  Writing about this walk I ask myself: was it worth travelling seven hours for a five hour walk along river and landscapes not particularly picturesque and littered with industrial units and metal scrapyards? I guess for many people the answer would be 'no' but I certainly do not regret starting this walk (after all even here I found some highlights and it did feel like an adventure) and will return to Crayford (after a break) to find out what the next section has to offer. I've just downloaded the "Rambling Man Walks the London LOOP" book onto my Kindle and am currently pondering whether to read his account before or after my walks. I think after will be better so as not to prejudge my views and thoughts.

Click here for more photos from this walk
Continue to Section 2: Crayford to Petts Wood