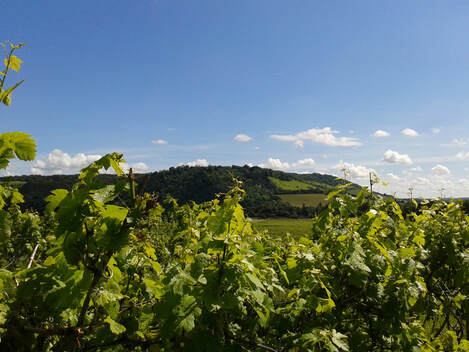 Box Hill
Saturday 22 June 2019
​
Back in April I arrived in Dorking and, looking across to Box Hill, promised myself to only return here on a clear day so I could fully enjoy the views. Well, today was just such a day.
I left Dorking Deepdene Station and returned to the North Downs Way via the Mole Gap Trail through Denbies vineyard. The sun was shining brightly now and it was quite hot so I appreciated the tree shaded walk that led downhill to the A24. This is another one of those irritating (to walkers) main roads that can’t be crossed safely and necessitate a tedious walk along the road to get to a safe crossing point – in this case a subway – and then back again on the other side. At least here there was a grass verge between road and foot/cycle path and this detour did have a positive as, just after using the subway to get to the other side, there is a hotel and a café. I decided to have an early cup of tea and cookie at the cheap and cheerful Ryka’s Café, which is popular with bikers (of both leather and lycra clad varieties).
I was ready now for Box Hill. The famous stepping stones crossing was officially closed because of an overturned stone but as I watched a family making it across and enjoying it, I wanted to try it too and with a helping hand from the dad I made it across. Excitement over, it was time to get serious with the hill. I marched up the steps with gusto as my still fresh legs made light work of it. Fabulous views opened up westwards to the vineyards and hills and southwards to Dorking. Not surprising then that there were lots of people near the viewing platform at the top of this famous beauty spot. I took in the view, snapped a photo or two and continued walking on the path which soon entered woodland again and, after running parallel to the Box Hill zig-zag road for a while, descended into Oak Woods and then uphill again. On a chalky uphill stretch, I stumbled and hit the ground immediately after I’d passed a family. They were so concerned, offering me a baby wipe and plaster to clean up a slightly broken thumb nail. Anyway, no damage done, other than to my pride, so I walked on, perhaps a little more carefully, and enjoyed the lovely path and chalkland flowers. 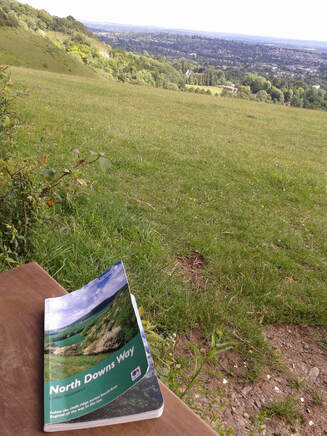 Colley Hill
​Soon the path joined the Pilgrim Way and reached a busy road at Betchworth. After walking along the pavement for a while and then on a footpath among the trees running parallel to the road, it was necessary to cross over and thankfully a tree-lined footpath now veered away from the road. Soon the trail turned left and headed steeply uphill, first on a hedged and slightly overgrown path and then into woodland (Dawcombe Nature Reserve). At a path junction, the route turns right and follows the woodland edge at the foot of Buckland Hills and then around Juniper Hill on a lovely path. I was thrilled to spot a sunbathing lizard! At the next path junction there was a change in direction. The North Downs Way turns left and climbs steeply uphill through the woods on a bridleway (Clifton’s Lane) to reach the top of the escarpment. A right turn onto a broad track then leads to some lovely walking on Colley Hill – a National Trust site. Walking on this well-managed grassland with extensive views south towards Reigate and beyond was a delight, and, not surprisingly, the beautiful weather and proximity to commuter belt towns, drew people up here. It was lovely to see so many families walking and enjoying the countryside. As well as the views, there are a few other points of interest up here, e.g. a water tower and Inglis Folly and then, further along on Reigate Hill, a wooden monument honouring nine American airmen who died when their fighter plane crashed into the hill in 1945. Shortly after, Reigate Fort also invites lingering. From here the path continues at a lofty height with Reigate to the right and the M25 (heard but not seen) to the left and soon arrives at a café (aptly named Junction 8), and a car park, which probably explains the number of people up here. The café offers delicious ice-creams and I couldn’t resist buying a lemon sorbet on this warm day. From here there are further extensive views southwards to Reigate and as far as Gatwick Airport and the hills beyond.
Now the walk continued through the woodland of Gatton Park and then on a lane that led to the Millennium Standing Stones (created by sculptor Richard Kindersley). After passing some residential buildings, a school and a church, the North Downs Way leaves Gatton Park.
Despite coming to the end of a long and quite strenuous walk, feeling a little tired and achy, I enjoyed the last bit. Walking through a golf course often means worrying about flying balls and tricky path location, but here there was a straight path in the middle of a very wide grass strip and there was something special about walking amid the tall grasses swaying in the breeze. It was easy to forget the traffic speeding along the nearby motorway. At the end of the grass strip, the path continued between a cricket pitch and a playing field. A game of cricket was in full swing and the pavilion terrace and refreshments looked inviting but for me it was time to leave the NDW and head for the train station in Merstham.
My highlights:Wildlife:Useful information
Transport:  Refreshments:
Click here for more photos from this walk