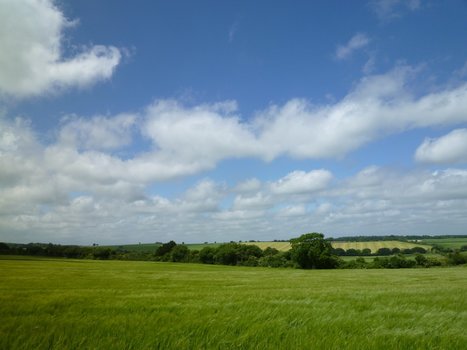 ​          It’s been four weeks since my previous long walk and a lot has happened since then: a short holiday, another play-off final defeat at Wembley, and, sadly, two horrific terrorist attacks in Manchester and London.
I left home early this Saturday as there was just one bus option to get to the start of the walk in Brown Candover. I enjoyed the train journey to Winchester and was pleased to have plenty of time between train arrival and bus departure as the bus station is situated on the other side of the town centre. I had to get three buses today so the bus driver suggested I get a Day Rider ticket for just over £8, which can be used on all the buses in the area, including the Cango.
After arriving in New Alresford, I first located the bus stop for my ride to Brown Candover and was pleased to find it almost straightaway in bustling Broad Street, practically next to the inviting Caracoli Coffee Shop. I had nearly 40 minutes to enjoy my morning cappuccino in the pleasant courtyard garden.
The Cango Bus dropped me off by the bus stop shelter in Brown Candover. This bus is different from other buses in that the friendly and skilful drivers seem happy to pick up and drop off passengers anywhere along the route. There were lots of cyclists on the narrow road – groups and individuals. The driver dealt with this minor inconvenience with patience and good humour.
I set off on the walk confidently but immediately took a wrong turn! This reminded me of how important it is to not to just blindly follow footpath signs even when the name of the lane (Spybush Lane) is familiar to you from looking at the route on the map. I realised my mistake when I arrived at a path junction at the top of the incline. The Wayfarer’s Walk does pass through that junction but only after following a different (more roundabout) route. I had to make a decision: return to the beginning of the walk or accept that I’ve taken a short cut and move on. My slightly obsessive nature didn’t allow me to take the easy option so I retraced my steps swiftly and off I went in the right direction.
The path followed a little (almost dried out) brook for a while towards Totford Farm and then went uphill for a bit (presumably for the views) to reach a road. The walk then continued downhill along the road to the small hamlet of Totford, which boasts a pub, the Woolpack. After crossing the road by the pub, a hedged track, becoming increasingly narrow as the vegetation, which included stingy nettles and field roses, tried to reclaim lost ground, followed a gentle uphill slope. I was pleased to have decided against wearing shorts this morning, especially when I had to avoid oncoming traffic, first a trio of cyclists, followed closely by a horse and its female rider. Strange that I only ever see female horse riders! Finally, I was back at the footpath junction where I had to turn back earlier. 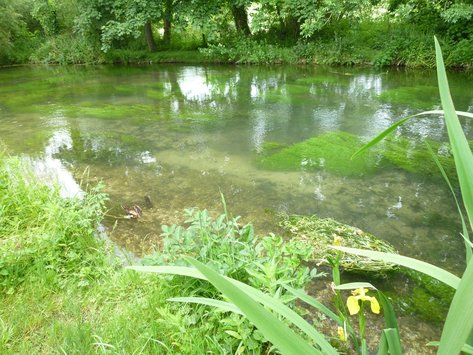 The River Alre
After a sharp right turn the walk continued along Spybush Lane and I enjoyed the open views across the Candover Valley. The track followed a gentle uphill slope to reach a woodland. Here the Three Castles Path joins the Wayfarers Walk for a while so I will return here in the not too distant future. I now had the rare sight of lots of people (mostly children, maybe a school group?). I chatted to one of the adult supervisors who told me there were 47 children in the group! They looked like city kids and I hope that this trip will give them a love of hiking and an appreciation of the countryside and nature. Passing the last of the children (there were some stragglers who needed encouragement) I was getting hungry and walked quickly to my designated lunch spot on Abbotstone Down. There was a lovely, open and grassy heathland area here, and I found a perfect spot to eat my posh Chicken & Tarragon sandwich which I bought earlier in Winchester. I even found a couple of tiny wild strawberries for dessert!
The path now followed a path, first through woodland and then a little tediously on a broad, stony track through open countryside, to Abbotstone. After taking a photo of a large herd of inquisitive cows and the crystal-clear chalk stream, I followed the hedged path uphill to the top of Itchen Stoke Down. Here the Three Castles Path continued straight on whilst the Wayfarer’s Walk took a sharp left turn on its way to New Alresford. I was now looking forward to a cup of tea and I knew that New Alresford wouldn’t disappoint. To a musical background (the Alresford Music Festival was in full swing) and in perfect weather I entered New Alresford walking on the beautiful riverside path. No detour was necessary as the Wayfarer’s Walk passes through the lively centre of the town. I paused for a pot of tea and chocolate chip cookie in the calmness of the courtyard garden of the Watercress Café before resuming the walk to today’s destination of Cheriton. Before leaving New Alresford, the path took me past an Armed Forces re-enactment of I’m not sure what. At my polite request, a soldier holding a Russian flag and a female soldier posed for a photo. I had a spring in my steps as I listened to ‘Kiss me Goodnight Sergeant Major’ sang by a Vera Lynn sound-alike singer nearby. I would have liked to linger here, trying to find the place where this live music originated from, but I had to get a move on now as I had a bus to catch in Cheriton – still a few miles away.
I crossed the Watercress Line- there was a train at the station and lots of people. Maybe the old train was running today. This town really pulled out all the stops today and I’d like to think that I’ll return one day.
After leaving the excitement behind, the trail followed a road for a while, and then, after crossing the main Winchester to Alton road on a footbridge continued pleasantly first on a grassy path through the Alresford Golf Course and then uphill to the top of another down. I turned round to enjoy the views towards Alresford before dropping down to the River Itchen at Cheriton Mill. I was getting slightly concerned about the time so I rather rushed along the path, dragged my wary legs over styles (how strange that styles are often to be found at the end of a long walk), through meadows (with and without cows trespassing the path) and a paddock with horses. I found the bus stop in Cheriton with a good 10 minutes to spare! 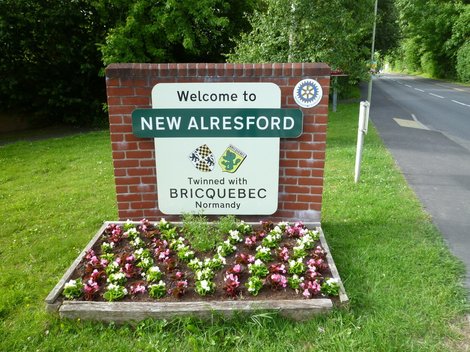 New Alresford Return
That should have been the end of this story but, alas, as I waited for the bus I found that the camera was missing from my pocket! I searched my rucksack twice, hoping that I’d put it away but I’d lost it! How utterly annoying. I was tempted to get on the bus anyway (there was not going to be another one from this village today) and hope that an honest person finds the camera and hands it in to the local police/authorities; but really the thought of possibly losing not only the camera but all the photos I took today was too unbearable so I reluctantly retraced my steps. I was relieved to find the camera quite quickly – by the style leading into the paddock on the edge of the village. Obviously, it was too late now to catch the bus so I had no choice but to walk back to New Alresford. I chose the quickest footpath route and was lucky that there was a bus back to Winchester soon after I arrived at the first bus stop (didn’t need to walk all the way to the centre of the town).
After a M&S salad dinner at Winchester station, while waiting for the train to Reading, I was hoping for a restful journey home, perhaps having a little snooze, or reading a chapter in my book, but a Bangladeshi man, on his way to Wolverhampton, started chatting to me on the platform and asked if he could sit next to me on the train – he was pleasant, was passionate about history (Napoleon, etc) and food - I couldn’t really say ‘no – I want to sit on my own’. So, after non-stop conversation all the way to Reading I reached the end of another adventure. Can’t wait for the next one!

My highlights:Wildlife:Useful information
Transport: Refreshments:Public Conveniences
Click here for more photos from this walk
Continue to the next section (Cheriton to Soberton)